This article is part of the InterRail series and follows Interrail (Part 2) – Belgium.

On August 5th, after yet another train lunch, we finally arrived at Amsterdam Centraal. It was my second time in Amsterdam (the first time was in October 2009, to attend the Maemo Summit).

This time we were not staying at a hotel but rather in the best place of all we stayed in this trip: Ana’s home.
Ana is a friend and a class mate of mine from the University and she had kindly invited us to stay at her place while in Amsterdam. It was really nice to meet her again (now that our group of friends is spread in different countries) and to see she’s doing fine with her internship at IBM and her studies in Vrije Universiteit.
After saying a first hello and just a small catching up — she was working from home that day but she could still tell me “How good you came today because you get to see the gay parade tomorrow!” (more on that later) — we drop the backpacks at her place and headed to the city. The weather was okay and we went for a pleasant boat trip of one hour in the canals (8 € per person, if you’re interested). After that, we went for a hot-dog while I showed Helena a bit of the things I could remember from what Ana had told me back in my first time to the city. Needless to say, the streets were much more crowded in August than what I had seen in October and we joined the crowd, doing the typical tourist things. 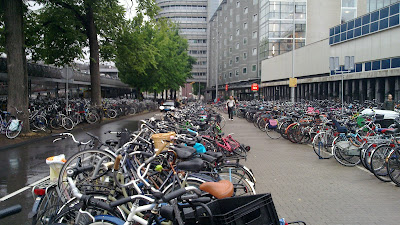 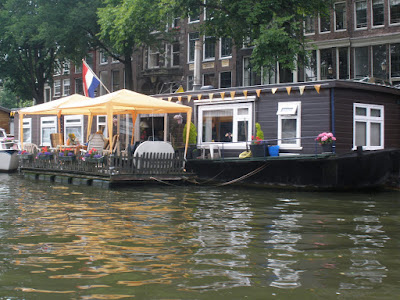 Later, Ana joined us and introduced us to her boyfriend Sven and we all went to have dinner at The Pancake Bakery. In The Pancake Bakery, you get to choose pancakes with pretty much anything you want, from strawberry and chocolate to chicken and onions, there are pancakes for everyone, really nice place.
After that, Ana and Sven took us for another walk in the city, this time with better guides, of course. On our way to the Red Light district we passed by a crowded block which had a huge party to celebrate the gay parade. We finished the trip by having a couple of drinks in a bar while talking about the Portuguese, Spanish and Dutch languages. 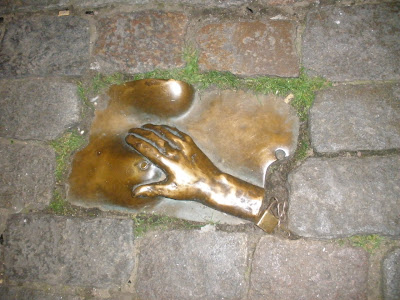 (In Amsterdam you may find curious things like this. Ana told me nobody knows how and why this got here…)

Back at Ana’s place, we had a really good night of sleep in her couch. Seariously, it was the best bed we slept in during the entire trip.
On a side note, I also took advantage of having internet connection to prevent another boring train trip and downloaded a book. I somehow thought carrying a book around would be too much extra weight but fully regretted it on the very first train trip. And how would I read the book if I don’t have (yet) an ebook reader? On my N900! Yes, that’s how desperate I was for intellectual stimulus. And the book? A Creative Commons work by Paul Carr, “Bringing Nothing to the Party“. (I might tell you how this experience went and what I think of the book on a separate post one of these days)

The next day we woke up to what I’d call a “breakfast for Dutch champions”! Man, I didn’t know the Dutch had such a variety of tasty, caloric bombs. There was everything, peanut butter mixed with chicken curry (yes, one single product), jelly, cereal and those tiny chocolate pieces that I thought were only used to decorate cakes. They eat these chocolate pieces with bread after a layer of butter. I’m happy all these tasty stuff weren’t available in my childhood or I’d weigh the triple I do today.
After this epic breakfast we left for another walk, the weather was now rainy for the first time in our trip but we didn’t care. I took Helena to visit the Westergasfabrik, an old gas factory where Maemo Summit took place, which is a pleasant place with grass fields and among other things, I wanted Helena to see its kindergarten.
The rain was starting to fall harder and when we were heading back to the city, we saw that in a canal ahead was a bunch of people and decorated boats, the gay parade was starting. Now, I’m not really a fan of the gay parade (I’m not against it or anything, I simply don’t find this or any other parade interesting) but Helena wanted to see it and so we stayed and watched the boats leaving. After that, all soaked up, we went to have lunch again in The Pancake Bakery (Helena really wanted to return there). It wasn’t until around 3 PM that we could find the damned place.
One of the nice things about The Netherlands is that nearly everybody speaks English, even older people. We could approach anyone and they would understand us and answer in a perfect English. All people were also really nice and helpful. 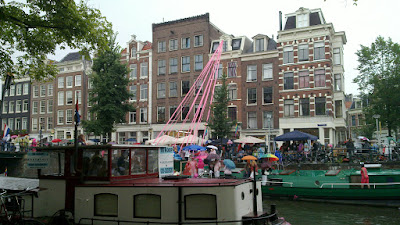 (Amsterdam prepared for the Gay Parade) 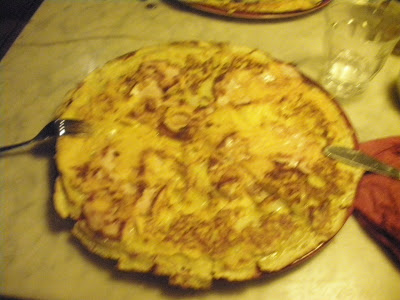 Having satisfied Helena’s hunger for a Nutella‘s pancake, we headed for the train station to ask the schedule of the trains to Berlin. All soaked up for the rain and tired of walking around, we entered the train station to what I didn’t know could happen in The Nederlands. The idea I had about The Nederlands was of extreme organization and order, so, I was expecting the train station to be organized as well.
Entering the train station, we realized we had to get a ticket and wait for our turn to get information but the ticket machine was nowhere to be found. Asking around I finally found it the opposite way of the information area… I got our ticket and we started what was to become a long wait. There were three information assistants but they took a lot of time after answering someone’s questions and calling the next person. This was mainly because they were talking with each other for a while before calling the next number and, unless their job is all about fun and happiness, it didn’t seem like work related conversation. Also, we spotted some people who just waited for an unanswered turn and took that chance to sneak in and get their doubts answered before any of us who were waiting now impatiently. During the time we waited, two of the assistants took a break and went for a cup of coffee or tea, delaying things even more. This is the thing I expected in my country, Portugal, but surprisingly, of all the countries we visited in this trip, The Netherlands was the place where we waited most to get information. At total, 1 hour and a half!
All grumpy and tired, we headed back to Ana’s flat.

That evening we went to do some food shopping (Helena bought the tiny chocolate things) and buy dinner from a local kebab and went back to the flat to have a quiet and pleasant dinner with Ana and Sven. We talked about Portugal, Spain and The Netherlands, the good and the bad of them all, and about particularities in the languages of those three countries; I love Europe and its diversity!
We also watched some old and “compromising” pictures from Ana’s devious archive of our time in University and ended the night watching stupid movies in YouTube and Takeshi’s Castle in the TV. Turns out the Dutch have a sharp sense of humor, which I thought they didn’t but Sven told me “that’s more like the Germans”. 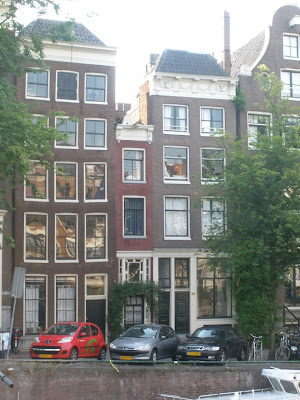 (the narrowest house in Amsterdam. House taxes used to be calculated based on a house’s width, this guy totally worked around it…)

It was really nice to meet Sven and to catch up with Ana now that we rarely see each other so, I must finish this post thanking them for being so nice and giving us such a good time in Amsterdam. We love your couch, and you guys, obviously 🙂
The next morning we said goodbye to our hosts and headed for the train station to catch the train to Berlin.

3 thoughts on “Interrail (Part 3) – The Netherlands”