This article is part of the InterRail series and follows Interrail (Part 4) – Germany.

On August 10th we were waiting for the train to Prague from Berlin’s Haupbahnhof when, about 10 minutes before it arrived, we heard a warning in German and all the people waiting with us left the place. We wondered if it was possible that the train station folks would warn about a last minute change of platforms for an international train only in German… and that’s what happened. Fortunately someone confirmed it for us and we hurried for the new platform.

The train to Prague was really crowded, not crowded like those trains shown in videos of India but crowded like everybody standing in the aisle, outside the train compartments. Most of the passengers were young people like us, nobody moved for like 5 or 10 minutes and that’s too much if you’re feeling somebody’s breath on your face…
The thing is that in Germany you’re not forced to reserve a seat like it is in France, for example, and Prague is a very attractive place for young people. Still, everyone remained calm except for a German passenger, probably on his 40s, that started violently pushing everybody and screaming “I have reservation! I have reservation!”, like we were leaving the planet after the apocalypse, until he entered his compartment…
Finally we got out of that passenger car and entered the next one which was more humanly squeezable and found ourselves a seat. 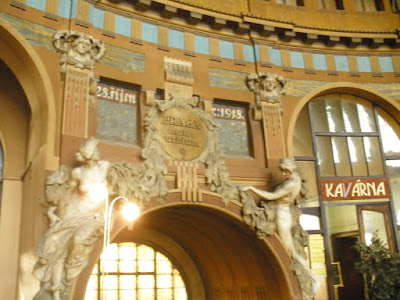 We were staying at Hotel Vitkov. This hotel was suggested by Tomeu Vizoso, a nice guy and great hacker who has been involved in interesting projects such as Sugar and PyGI. Tomeu had been kind enough to leave a comment to the blog post, where I announced I would be Interrailing through Europe, inviting me for a drink in Prague and I took the chance to ask him about hotels.
This 3 star hotel was a bit far from the center, 20 minutes by tram, but it was nice and very cheap: a double room for 31 € per night, with breakfast and all.

Getting to the hotel by tram was another little adventure because, even though we knew the tram number to get there, the ticket machines had several kinds of tickets and had a too vague English description in tiny letters. Since it only accepted coins, I went to a cafe to exchange the bills and had to ask someone in the tram to warn us when we passed by the hotel. Everybody was really nice and spoke good English.

“Ah, that’s because this is the worst street of Prague.”

When we finally got to the hotel, we made arrangements with Tomeu to go have dinner nearby. We went out following Google Maps’ indications and this was the second adventure. It was already night, the street was kind of dark we couldn’t see a soul outside apart from a group of drunk men walking down the street and a barechested old man screaming something at us from the other side of the street while clapping his hands. We felt like the guys from EuroTrip when they arrive at Bratislava and hurried to find the restaurant already thinking Tomeu was crazy. 🙂

We arrived a bit early at Restaurant Merenda so we sat, waiting for Tomeu to arrive. The waiter brought us the menus (that also were translated to English) but asked us what we wanted in Czech. I answer, in English, that we were waiting for our friend who was arriving very soon. He didn’t understand and just asked: “Two beers?”; “Not yet, we are waiting for a friend…”, I also pointed to my watch and to the empty third chair; “hmmm… one beer? two beers?” he replied, now getting more angrier; “Two beers, please!” I finally figured out.
When Tomeu arrived he explained us, and we would experiment it once again later, that the dynamics of someone serving you in there were different. He said that “it is like if the waiters are the school teachers and we are the pupils, they are a bit authoritarian and we need to respect them”. Indeed.
Anyway, Tomeu’s girlfriend joined us later and we had a nice, Portuguese spoken, dinner (they lived in Portugal for some years). Oh, and my goulash and beers were damned good!

After that, we went for a coffee in another place and I asked them about the scary street. He said something funny “Ah, that’s because this is the worst street of Prague.”, oh that explains it, thank you very much! “Is it as unsafe as it looks?” I asked and he replied it is not and that he didn’t know anyone who got mugged in there or anything but when he wanted confirmation from his girlfriend, she said “I’ve heard of some people who got robbed here, yes.”. After we said goodbye, with my spidey sense on full-alert, we walked back to the hotel. 🙂

The Prague of postcards

The next day, we went to the city center to do another trour with New Europe (see the Germany post to know what’s it about). This time we had a Scottish guide who kindly told us not to worry because he would do his best to be understood. Later in the trip he also mentioned that Prague was really safe and the crimes in there were basically petty crimes. On the other hand, he said it had also the highest number of deaths in crosswalks and I can imagine it, because people there drive like crazy; and I come from Portugal, I know what I am talking about. 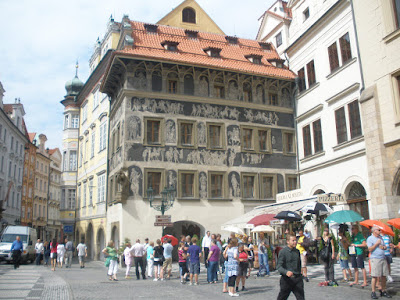 It was a nice walk in the city center where he explained some of the most interesting things about the city. Kafka’s statues, the Old New Synagogue or the Astronomical Clock (one of the world’s most overrated tourist sights) were just some of the things the guide explained. We ended the tour near King Charles bridge. Now this is the Prague I had imagined. The most impressive part of the tour for me was when the guide talked about the Museum of Children’s Drawings which has drawings from Jewish children held in Nazi concentration camps in WW2. We couldn’t enter the museum because we didn’t feel like waiting in the long line but according to the tour guide, the drawings show pretty much the same things as today’s children’s drawings: trees, houses, families; they didn’t show destruction or chaos as it would be expected. I hope that some day I’ll be able to go back there and visit it. 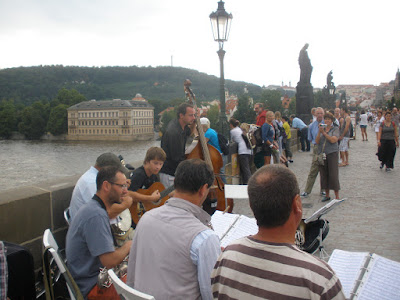 After the trip, me and Helena crossed King Charles bridge to the other side, bought some souvenirs, visited a few things more and passed by the train station to ask for information on the trains to Munich. After about 30 minutes waiting in the line, we asked the assistant for the schedule and she said “How many tickets?”, “No, I have an InterRail pass, I just need to know the schedule.”, she made an angry face and pointed to her left and said “Information!”, “… but can’t you just tell me at what time the trains…”, “Information!”, “… but I…”, “Information!”. After confirming, with the right Information! assistant, that we would have a train to Munich, we headed to the hotel. 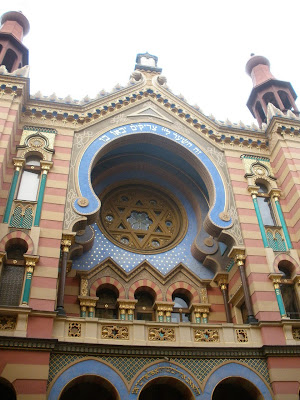 The dinner was in a restaurant close to the hotel. It was funny that the decoration of the restaurant and everything seemed pretty much like the average restaurants in Portugal 10 years ago.
This was the second time we experimented a waiter’s “school teacher’s kindness” when I waved to him when he was passing by (like, please come by when you can) and he pointed with his head to his hands, full of plates, and made an expression that said something like “stupid idiot tourists don’t you see I’m working here”. If after that the food had spit on it or not, I don’t know, but it was again really good.

Our conclusions to Prague is that it is a really nice place that surely deserves a second visit but we didn’t get as impressed as we think we would. Maybe our expectations were too high or we weren’t looking exactly for partying like everybody else seemed to. It was indeed a great place for drinking. When we were at the train station to leave Prague we heard a group of Spanish guys talking about how cheap it has been for them to drink and party all night.

On August 12th, at around 9 AM, we were getting on a train to our second German city of the trip.