Already on our way back home, at 09:23 AM we left Munich to Mannheim where we would change trains to finally get to Paris. The trip was really fast and calm in the German high-speed trains and we arrived at Paris Est at around 5 PM and a new adventure begun…

Given the Catholic holidays thing that the German assistant had told us back in Munich’s train station, we still didn’t know if we would have a place in the night train to Irún which meant we’d have to spend the night in Paris without any room booked. More importantly, would there be any free seats or beds the next days? How difficult would it be for us to get to Spain!?

In that same Paris Est train station, we asked if there were any seats left in “our” train and got the bad news, the train was full! Still, with the typical hope we got in Portuguese hearts, we decided to go the Paris Austerlitz train station where our train would departure from and ask there… should we get different results…

We hurried to the subway to get to Paris Austerlitz train station and, once there, quickly headed to the ticket sales line. Since we needed delicate information and couldn’t risk it getting lost in our rusty French, we waited in the line for the only assistant, out or 4 that had the English flag above his window; and waited, and waited… and waited. Turns out the sales assistant and the girl he was assisting were flirting like characters out of a French romance… and they took their time so, meanwhile, I had to tell everybody in the line behind me “Je necessite l’Anglais…” when they asked me why I wouldn’t take my turn. Helena got tired of and tried her luck asking about the train to another sales assistant in French but the assistant was so rude Helena didn’t really understood if we had a place in the train or not.

On our way home!

Finally we saw another assistant, a bit far away, waving at us, asking us to go there. He didn’t have the little English flag on but we went and he told us, in perfect English, that though he spoke good English, he needed to be working for a while in the company and pass some exams before he got the “right” to have the flag on his window… The bureaucratic nonsense of big companies. Anyway, his name was Pierre and he saved our day! He looked for the train’s details in his computer and told us with great surprise: “Who told you the train was full!? There are plenty of beds available and if you want I can also book the tickets from Irún to Coruña from here, do you want me to do it?” YES WE DO!

At around 11 PM we got on the train and were all happy to be alone (and not with people partying or drinking or whatever like we had seen in other compartments) in the 6 bunker bed compartment until two German girls came in and I couldn’t complain either, even Helena told me in a low voice “Oh.. how lucky you are!”. Yes, everything was going just fine when another passenger came in, a French guy on his 40s, drunk and smelling like one. He came in, closed the window shade hitting Helena’s feet hard, then seated in his bed and took out a little knife… and with the knife he took about 30 seconds to rip the plastic bag where his pillow was in. What the..!?
Anyway, we were on the train and though he was drunk and snored, it could have been worse.

We arrived at Irún at around 7:30 AM, went to the sales assistant and he told us they had been expecting us in the station because the trains to Coruña were full but they knew two people had reserved their tickets in Paris and needed the tickets. Thank you again Pierre!

After another boring 11 hour trip, we finally got home, at the beautiful city of Coruña.

This article finishes the series of articles about our InterRail trip in the summer of 2010. It took me almost a year to write these articles but I could remember a good part of it with the help of tickets, maps, postcards, etc. Helena kept and also with the photos we took.
I hope I shared the enthusiasm of traveling around Europe by train and that readers who haven’t been on an InterRail consider to do so now.

Until the next trip! 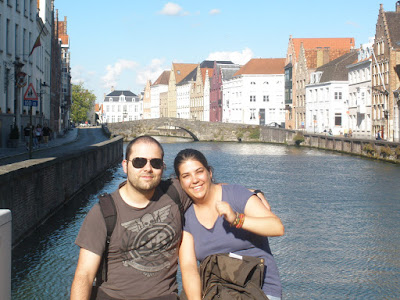 One thought on “Interrail – France (the end)”