Looking at this title gives me a “blast from the past” kind of feeling.
OCRFeeder hasn’t seen a release in 6 years (!), but due to some recent efforts from members of the GNOME community, I decided to dedicate a few late nights to it and here it is the new release finally: version 0.8.2.

I gotta give my special thanks to the community member scx who not only fixed a few important issues and added a couple of quick improvements, but also was patient enough to wait for my delayed reviews last year, and even created the flatpak for OCRFeeder.

Here are a few paragraphs about the changes/status:

Perhaps the biggest change in this version is the port to Python 3. Yes, Python 3 has not been a new thing for a while now, but it was never a priority to port the source code to it. An extra incentive for me to do the change though, is that Debian is in the process of nuking Python 2 for good.

One of the good things that Python 3 brings is unicode support by default, so hopefully there will be no more unicode issues in OCRFeeder.

One feature that was added a long time ago is the support for importing pages directly from a scanner device. This feature never worked very well, and it’s actually very complicated to have a scanning functionality that includes everything that a user may need.

Luckily, scx has fixed a lot of the issues in the scanning dialog, so at least the intended functionality should be working again.
Still, as I have proposed in the scan discussion. I think that with great apps like GNOME Document Scanner or the eventual development of a scanner portal in flatpak, the extra effort of maintaining a half-baked scanner support is not justified, and thus I am very inclined towards just removing that support.

There are MANY things that I would like to rewrite in OCRFeeder. It has code written more than 11 years ago, by the unexperienced student I was, and I believe I know better now.
However, I don’t see that happening any time soon. My life changed a lot since the last time OCRFeeder was under active development, and I simply don’t have the time nor the motivation to spend hours of my own free time working on it. These days I prefer spending time with my family, playing squash, or working on completely different projects.

I did ask some of the people who contributed from time to time whether they wanted to transition to a maintainor role (with some initial guidance from me), but there was also no time from them (and I of course understand 100%).

OCRFeeder had its spotlight moments, like when it was part of a public initiative by the Andalusian Government to improve accessibility on Linux, or when it featured in magazine articles, etc.
So even though the tone of this section doesn’t sound the most cheerful, it’s also not that of a grievance or regret. I think OCRFeeder is still helpful for some users, and it will likely continue to receive sporadic contributions. Having it on flatpak also means that the effort to get it running in different distros has been dramatically reduced. But I don’t have any plans for reviving it beyond that.

I hope you enjoy OCRFeeder on flatpak, and do get in touch if you want to participate. 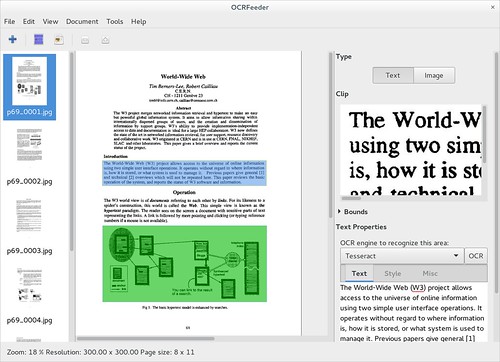 After a long time without a new release, OCRFeeder 0.8 is out! The previous version was released in February 2013 from another continent 🙂 After that a lot of things happened in my life (very good ones) and I didn’t really have much time to devote to the project.

This version represents one big change: it was ported to GObject Introspection (and thus GTK+ 3)!
This is also related to the delay (because GooCanvas’s GI, a dependency, was not usable in the beginning). Also, after the port started, a few things were deprecated in GTK+ — like Stock items — but this will only be updated on a future release.

I didn’t want many new features in this version as I wanted it to be basically about the port to GI. This way, “eventual” bugs are likely to be about this change and not about unstable new features. I included a small novelty however: support for multi-page TIFF images.
There are, of course, some other small improvements that were developed, as well as a number of bugs that were fixed.

Work, life and other projects make it more and more difficult to find the time to work on OCRFeeder. I would nonetheless be happy to help anyone interested in contributing to it to give the first steps. I believe that OCRFeeder is a useful project and not only for accessibility purposes (although this is a great reason on its own!) so, if you like Python, GTK+, and want to help make this project better, drop me an email.

I need to thank one more time to the awesome GNOME i18n team for keeping OCRFeeder available in many languages and to my dear friend Berto for keeping the Debian package up to date and for the useful bug reports!