The first half of August I went on an InterRail trip with my girlfriend and I’ve been willing to write about it since we finished it.

First a disclaimer: the names of places and particularly the times I talk about in the text might not be accurate since I didn’t keep notes of them.

We had a 15-day pass, from August 2nd to 16th, to travel by train across Europe.
The original itinerary would be Paris, Brussels, Gent, Bruges, Amsterdam, Berlin and Prague. From Prague we hadn’t decided what to do from the beginning since we didn’t really know how much time we would need to return to Spain.

So, Sunday, August 1st, it was almost 02:00 AM when we finished organizing our back packs. Sandwiches: check; clothes: check; ID and respective copies: check; etc.
We left home at 07:00 AM to go to Coruña‘s train station and wait for the first of the many trains we’d catch.

We started heading south to Ourense and then north until the last stop, Hendaye, already in France. This is one of the reasons it takes so much to get there (around 11 hours of train), the train goes all the way down to the south of Galicia and only then starts heading to the border with France.

With 11 hours of train, 2 movies dubbed in Spanish (only in the trip back I discovered I could switch the sound channel to English), a drained PSP’s battery and some hours of studying French (what I learned in high-school was rusty), we still needed to buy the tickets from Hendaye to Paris. I went and asked the saleslady in French for two tickets to Paris and I must have done it so well that she answered me with so much information and in such a fast speech that I didn’t get much but it couldn’t be a simple answer of “Okay Sir, it’ll be N euros, please”. Plan B: “Anglais, S’il vous plaît?” and I got my requested translation:
“The train to Paris is full, the next train is at 7:50 in the morning…”
Oh, it sounded a lot better in French…
“Okay”, I said, “… but ain’t there other trains leaving to Paris?”
“No but there might be beds left. You’ll have to wait for the train’s assistant and ask him if there are still beds left.”

Things weren’t looking good. It was already night, the landscape wasn’t presenting Hendaye as anything interesting to spend the night and besides, leaving to Paris at 08 AM would kinda screw the plans we had: visit Paris in 1 day and leave the day after in the morning.

The hour until the “train man” arrived was a long wait. And as soon as I got the chance I approached him and asked about the beds, along with a lost puppy face to get the best of him. Is answer: “In 10 minutes…”
20 minutes passed and I asked him again, his answer: “In 10 minutes, please.”
After a while they put a little table on the side of the train and started reviewing the tickets — “First the people that have tickets!” — and we realized that there were a bunch of travelers in the same situation as us.
Finally it was our turn and, guess what, they had beds! Hooray! We paid the beds reservation and rushed to the train as if they could change their mind about the existence of free beds.

Helena had the tickets and was guiding us through the various cars until she found our beds. We pushed the backpacks under our beds (we got the bottom bunk beds), turned off the light, locked the door and prepared to sleep. We were really happy, we had been lucky and we were on our way to Paris, plus, no “room mates” so far! An then someone knocked on the door; they were two girls and two boys and the guys were telling us we were on their spots. “Poor mistaken guy, couldn’t read his ticket…” I thought and Helena showed them that those bed numbers were ours, he agreed but the car we were at wasn’t ours… We were 6 cars ahead of ours. Helena had misread the ticket 🙂 . We apologized and headed to the right car and the right room. It was locked. We knocked, nothing. We knocked again and again, still nothing. It was locked from the outside and we spent almost 30 minutes until we found a train assistant and asked him to open it for us.
Finally we were on the right beds, set the alarm to 06:30 AM and went to sleep in a room without other people whole night.

We arrived at Gare d’Austerlitz at 07:15 AM, bought tickets to the subway and headed to the Auberge Internationale des Jeunes, 10 minutes to the Place de la Bastille. We left the backpacks in the baggage room (the room was available only after 04:00 PM) and entered the café in front of the hostel to have breakfast before start visiting Paris. 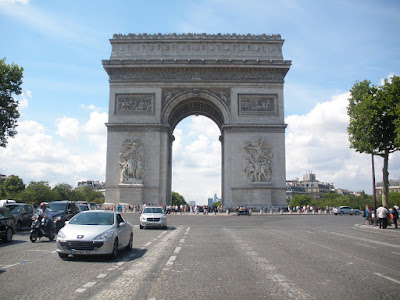 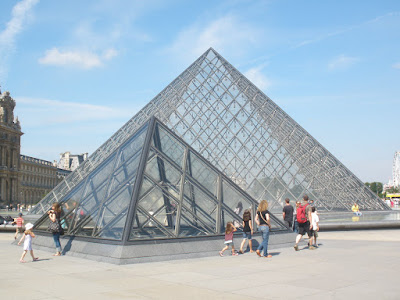 With only one day to be in Paris, we walked like hell but could cover a good part of the city. We could pass by Place de la Bastille, Catedral de Notre Dame, Place de la Concorde, the Louvre, Champ-Élysées, Arc de Triumph and finally to the Eiffel Tower.
This city surely has a magnificent set of monuments to show us. 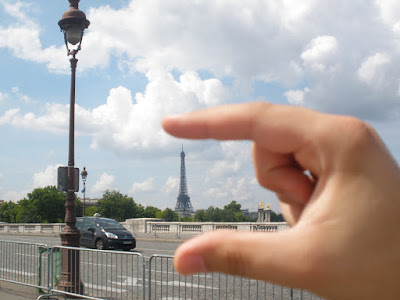 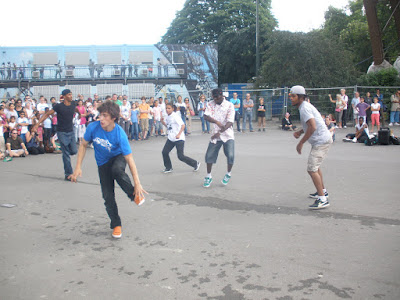 During this walking trip, we found a place just by the side of the river where people were playing table soccer but the tables there varied from 2 to 12 people. Being Portuguese, the possibility of playing table soccer in Paris was really appealing and we went there, it could only be really expensive, right? it was Paris after all: it was for free, some initiative by the city hall or something. Really nice. 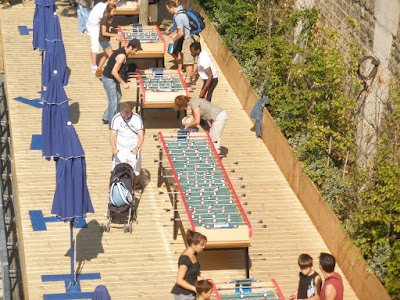 After skipping our plan to go to the top of the Eiffel Tower due to the enormous queue and our already tired bodies, as we were leaving the place a few break dancers started putting up a show that we really enjoyed. It was a different visit to the Eiffel Tower as you see.

After this, we headed back to the hostel and finally entered the room with the plans of having a shower and rest a bit before dinner; that’s when we found out there were no bathroom in the room. I swear I had read the room had a bathroom and started reading the booking terms we had printed; it said something like:
“Rooms for 2, 3 or 4 people with bathroom.
Rooms for 4 people have bathroom en suite; the others have the facilities in the same floor.”
And for some reason, when I booked it I assumed our 2-people room for which we had paid 35 € per person would have bathroom; anyway, it was one night so we had a shower, had dinner and went to sleep.
Another detail, it had bunk beds. A double room with bunk beds!

At around 5 AM, a big, scaring noise woke me up and I heard Helena complaining to someone; you see, our room was just next to the showers and the pipes were as noisy as a Panzer tank (I suppose, of course) and even though every room had a sign in the door saying “Avoid showers after 10 PM”, people seemed to take that “avoid” as a mere suggestion.
So Helena and some Spanish girl who was also awaken went and told the 5-AM-showering-people to stop it.

Yup, at the age of 25, I already find it not funny to pay 35 €/night for an internetless, shared bathroom, noisy, bunk-bed room.
By the way, all the hotels (note, hotels, not hostels) we stayed after this one were cheaper and way better than this youth hostel. Why do people stay in these places?
We realized that if you go to Booking.com there seems to be always a last hour offer or something where you can get nice hotels cheaper than what you pay for a double room in a youth hostel. Also, sometimes the difference is 5-10 € and I prefer to have a bathroom and a silent, normal bed room for that extra fee.

The next morning we decided to go and see the Sacré-Coeur. Since we had already checked-out, we had to go through the three large set of stairs while carrying our backpacks. Morning exercise, folks!
The view of Paris from the Sacré-Coeur compensated it in the end and that was it for Paris; next destination: Brussels, but not without another little adventure first. To get to Brussels with the cheapest reservation fee (it was 3 € VS 60 € for the direct train) we needed to go from Paris to Lille to Tournai where we’d then go straight to Bruxelles Midi. It wasn’t complicated at all except that we didn’t know if we needed to pay the reservation from Lille to Tournai, so Helena went to the ticket sales queue while I went to the informations queue. It took the info assistant a while to understand what the problem was and we ended up missing the train to Tournai. No problem, we’ll get the next one; and we kept a eye on the departures board (in France and, as we laster found out, in Czech Republic, the train platforms only show up about 10 minutes before the departure) and when the time came, the board said: Destination: Tournai, Train: Autocar.
Funny name for a train I thought, given that the word for bus in Portuguese is “Autocarro”. So I bugged the assistant one more time and she told me that indeed, it was a bus, there had been an accident in the train line and the train company had reserved a bus for the passengers to go to Tournai. It was an interesting 40-minute bus ride through the country side in the border between France and Brussels.

And that was it, my first time to France and the beautiful and expensive city of Paris.
Finally in Tournai we took the train to Brussels.

3 thoughts on “Interrail – France (the beginning)”