This article is part of the InterRail series and follows Interrail – France (the beginning).

We finally arrived at Gare du Midi/Zuidstation, we should have continued in the train to the Central Station but I didn’t really knew where it was, so, we instead took the subway to get close to the Grand Place and our Hotel.

We stayed at Hotel Mozart, this and the hostel in Paris were the only places we booked before starting the trip. For Brussels I had still been looking in HotelWorld.com for cheap places, yet, all the double rooms were more than 30 € per person and night and away from the center. Finally, with Booking.com‘s last room thing, we paid 49 € per room and the hotel was pretty cool. It is about 1 minute walking from the Grand Place and decorated in an Arabic style that made it look like a museum (what does Arabic has to do with Mozart remains a mystery to me). 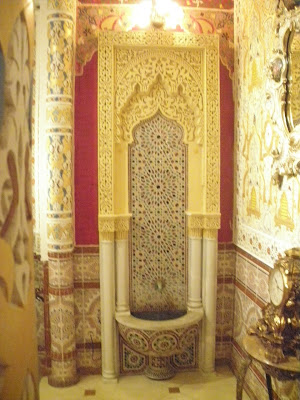 An Arabic fountain in the Hotel

I had passed in the hotel’s street every time I was in Brussels before but never in the Summer. All the times I went there it was in February (yes, for FOSDEM), and it turns out that street can be quite noisy for those who want to sleep but we didn’t really care.
That same night I decided to practice my French with the receptionist and I asked him why there were so many photos of Obama in the hotel’s walls and he told me: “That’s because the boss is American, from California!”. We chit-chatted a bit about whether Obama can change more things. Really cool guys the two receptionists I had the chance to talk to in the hotel.

I don’t know how to explain it but there’s something about Brussels I like a lot. Some of my friends say it’s a small, uninteresting city but I love it there. I love the beer, the sightings, the comic paintings on the side of some buildings, the Grand Place, the fries, Amadeus and of course, FOSDEM!
Now what’s the Amadeus thing above? Well, it is the place you wanna be when you’re starving like we were during our train trips! It’s Amadeus, the Place for Ribs (TM?)!
Amadeus is a warm, dim lighted, vintage-environment restaurant where they serve you spare ribs! So imagine this, you enter this huge place, walls covered floor-to-ceiling by bookshelves (full of real books of course) and you can get to eat huge ribs (I think they are cow ribs, but they could easily be dinosaur’s, I had never tasted dinosaur so I couldn’t tell) along with a nice salad and a roasted potato covered with a tasty sauce. The price? I’ve always paid less than 20 € so it is indeed “a great deal of a meal”!
The music from the 30s set a really nice atmosphere too, together with the dim lights it is like entering another dimension. A dimension that raises you cholesterol and makes you feel bad for not having more space in your stomach for more, it’s just so tasty!
Oh, by the way, in Brussels it isn’t called Amadeus but Amadeo. This year I had to ask it and a waiter told me that it was because there was already a place called Amadeus in Brussels. 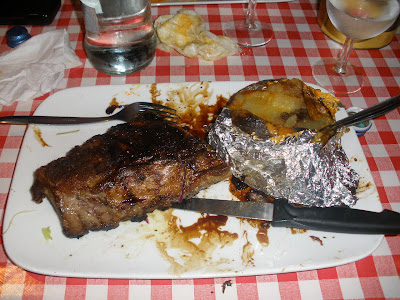 An already half eaten rib at Amadeus!

If you have been to FOSDEM and attended its Friday Beer Event these last couple of years, you’re familiar with Delirium Café, a place with over 2000 brands of beer. I was curious to check it out again but this time with less than 1 geek per square meter and I had been telling Helena “I gotta take you there, you’re gonna love the Kasteel beer!”, and she did. What a better way to finish the night after a colossal dinner than drinking a tasty beer such as Kasteel Kriek? For those who don’t know, this is a cherry-flavored beer but with a difference with the other cherry-flavored brands I tasted: it has 8 degrees of alcohol! So it goes in like juice, but the effects are different…
Helena loved it!

We were supposed to stay in the hotel just for one night but we liked it so much that I put my negotiator hat on and talked to the receptionist about staying one more night (I didn’t want this extra night to cost us the original 150 € /night of the room without the last-room discount). So I asked him how much would it be for us to stay one more night and he asked me “How much are you paying now?”, “49 €” I said and he made it easy: “Okay, just gimme 50 €!” and we got our extra night.

The next day we went to the Atomium, I had never been there, and it’s impressive! We stood like 5 minutes on the line to enter and then realized it had an exposition inside and we felt we would spend a lot of time in it (we’re still traumatized by the time we spent in London’s museums), so, after taking a few pictures, we left, as we had wanted to go visit Gent and Bruges. 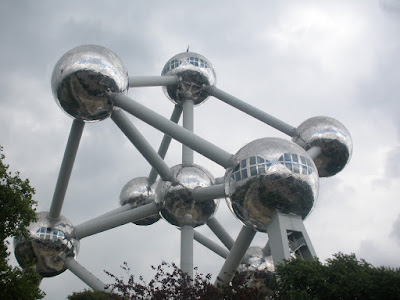 Gent is a beautiful city and the capital of East Flanders. I had been to Gent the first time I went to FOSDEM but I went there at night and so, this was like the first time I was there. It’s like our travel guide book said, it’s a nice alternative to Bruges, still beautiful but with less tourists. 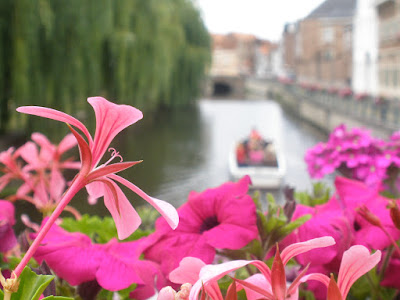 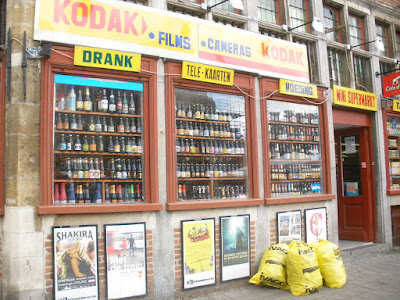 Look at how many beers this little shop has (in Gent)

We were eager to visit Bruges, I had watched the movie “In Bruges” which got me interested in the city; the movie is great BTW. So, Bruges, from the very start (outside the train station) to the center square, was simply marvelous. Everything was so clean and so well cared for; of course, the market square was filled with tourists, much more than Gent but it was pleasant. We entered the tower in the square, the same that plays a big part in the movie I mentioned but we couldn’t see how to get up there… Maybe it is because it was past 5 PM. 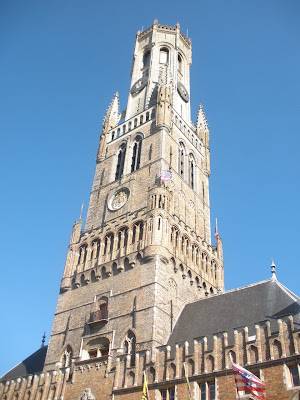 The tower in Bruges.

Later, while entering the train, I had the feeling that it was first class (our InterRail tickets were for second class) but since there were only us a another couple, we didn’t care to check it out. Then, when the ticket collector came by, he confirmed us it was the first class car but: “You know, don’t worry, this is Belgium, you only need to switch to the second class, there’s no problem.”, he told us with a smile. We did so and we were only 10 minutes from Brussels, so, I guess I can say we traveled first class at least once in this trip.
And how well organized the train system seemed to me in Belgium! We asked for the trips to Amsterdam and we were given a free little book with all the schedules to and from all locations; the information and ticket sales people we talked to all spoke good English; I love the fact that there are no barriers/doors to enter the subway or the tram (and yes, we always paid the tickets), a different philosophy I guess.

Back in Brussels, I had a secret I had been keeping from Helena all day. I had been carrying all day two rings and a pair of earrings in my pocket just waiting for the right moment to propose to her. My idea was to do it in Bruges but I couldn’t find the right moment so, when we were crossing the Grand Place heading again to the Delirium Café, I did it and it was a beautiful moment! 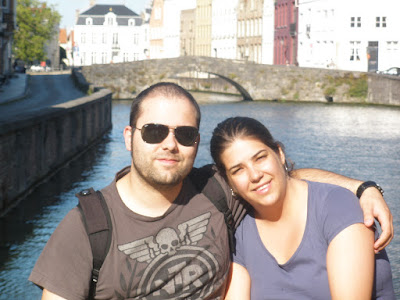 Just before having another Kriek beer in Bruges!

The next morning, we had a very tight agenda. I wanted to take Helena to the chocolaterie I had bought her gifts last February. I cannot remember the name (I remember the location perfectly, it’s all that matters). The chocolates were really expensive BUT, compared to Leonidas and other cheaper brands they totally worth it. Helena says they are the best chocolates she ever tasted!
Unfortunately, the place was still closed and so, we headed for the second place that I wanted to take: Le Pain Quotidien. I discovered this pastry with Victor when we were starving and started looking for a place to have breakfast near FOSDEM. Later, in London, I found also one of these pastries and realized it is a chain, but it’s a nice one. The idea is: you enter this warm place that smells like baking bread and you have long wood tables where you seat near the other costumer; you choose what pastry or bread you want, all organic, of course, and the best is that in the center of the table there are a lot of jelly pots, butter, etc. (In London it was different… you had to choose only one kind of jelly beforehand… not the same thing!)
Oh, and when we were leaving the place we noticed they were highlighting a new product: Pastel de Nata; we forgive them for not mentioning it’s a (very) Portuguese product. 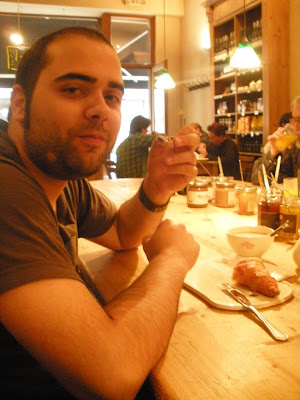 After this, we waved good bye to the lovely city of Brussels and went to the train station. Having a little time before the train arrived I remembered one thing, one scary thing… we had forgot to book the tickets from Paris to Irún for our return trip, and chances were the trains would still be full by then. Actually, we had remembered it but we hadn’t decided when we were getting back, so we just postponed that decision. Feeling a bit of panic, I asked the ticket salesman if we could book the tickets from Brussels, he said we could not but he could check the availability for the day we wanted to return; okay, the 15th? No? 14th? Also full? 13th? Not even the 13th!?
What the hell, we are young and adventurous so we put the panic feeling in a dark corner of our brains and headed to Amsterdam.